Roy High’s Football team of 2018-2019 has come a long way, and both coaches and players contributed more drive than previous football seasons. This drive is both technical and mental. For example the team has done conditioning to the max, and not the mention all of the film that they have watched. Although they watched less film, this year they took what they were watching seriously. Jaxson Dart, Quarterback, said “I read the defenses better this year, even though we spent less time in the film room.” Film is one effective form of study in football, but what matters the most is what you learn on the field.

Nine football players from Roy High concluded together that conditioning was tougher this year. Conditioning increased in volumes as they did it from twice a week last year, to just about everyday of the week this year. “I think that the coaches just saw that we were a better team this year,” Dart says.

Conditioning was a huge factor to the region champion team along with the mental change all football players had this year. On the field of Roy High we look at our sizes compared to other schools. Although we didn’t make it as far as state championships we made it much further than last year’s team. Seeing improvements from last year to this year is a positive thing for the next team of Roy High.

“Stay in the weight room and committed” Adrian Arellano, running back/full back, of Roy High commented. “It just feels like attitudes are better around this year.” Arellano concluded. Mcquade Andrade, our defensive back, says “I took everyday like a new day, and focused on what I have to do.” He spoke with a smile on his face: “trust your preparation.” Looking at the 2017-2018 team of last year, you see improvements on things as simple as their execution of the game play.  Coach Salamona also included “Embrace hard work, because it’s really instilled here and Roy. Once you graduate, once you leave, when you look back, you start to look back and think, ‘Okay, how did my high school career look?’ And a lot of this is hard work, and what you put in is what you get out.” Attitude was a huge contributor to this year’s team, some believe that the football team just wanted to go further this year, and some believe that it may be something as simple as the age this year. 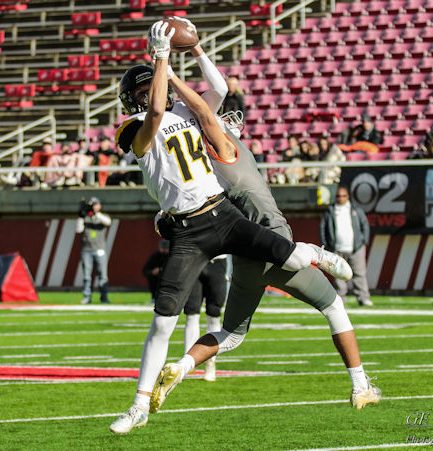 Our varsity team seems to be filled with seniors this year, all but a couple such as our quarterback Jackson Dart, running back Cade Harris, and linebacker Jaden Harris. Salamona stated “We have strong senior group this year, a lot more contribution with their play.” he also added “I think we have more senior leadership stand up on the off season, they influence everything that goes on with our younger group.” 5 seniors on the 2018-2019 team have all said that this year’s team seems more brotherly. Last year’s team was filled with juniors, sophomores and little to no seniors. The seniors of the group this year took the reins and showed our younger group what it meant to be apart of the Roy High football team.

Roy High varsity football players have gave the quote of “good” as something they told themselves before each game. For every negative thought they gave themselves 3 positive statements. Even during the game against Skyridge, multiple boys kept their head held high and kept looking toward the future, what they could be doing, rather than what they were doing wrong. Like Andrade says, “focus on what I have to do… Trust your preparation.”

Fresh off the Press

Back in the archives